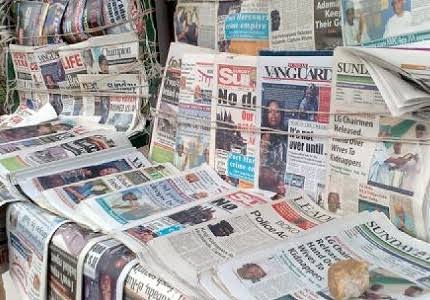 1. The All Progressives Grand Alliance, APGA, won in 18 Local Government Areas out of the 20 announced by the Independent National Electoral Commission (INEC) in the Anambra governorship election.

2. Still on Anambra election; the Independent National Electoral Commission, INEC, has declared the governorship election inconclusive. This is owing to the inability of the commission to deploy staff and materials to Ihiala Local Government Area, as a result of security threat.

3. Two of the 66 worshipers abducted from Emmanuel Baptist Church, Kakau Daji, Chikun Local Government Area of Kaduna State have been shot dead. This was disclosed by Chairman of the Christian Association of Nigeria in Kaduna, joseph Hayab.

4. A Supervisory Presiding Officer in the ongoing gubernatorial election in Anambra State has absconded with 41 result sheets. Dr. Gabriel Odor, Collation Officer of Idemili South Local Government Area of Anambra, announced this at the head office of the Independent National Electoral Commission (INEC) in Awka, the state capital, during the final collation of results on Sunday.

5. The Nigerian Union of Teachers (NUT) yesterday, decried growing security challenges in the country, claiming the union has lost at least 800 of its members to the insurgency which has been ravaging the Northeast zone of the country. It also threatened to withdraw teachers from some local government areas in some states in the Northwest over rising kidnapping, banditry and other criminal activities ravaging the zone.

6. The Nigerian Meteorological Agency (NiMet) predicted on Sunday that there would be three days of thunderstorms and sunshine across the country from Monday to Wednesday. NiMet`s weather outlook released in Abuja predicted sunny skies to prevail over the northern parts of the country on Monday with chances of isolated thunderstorms over parts of Taraba in the morning hours.

7. The Indigenous People of Biafra, IPOB, yesterday alleged that jihadists came to attack Enugu State while the Anambra State governorship election was ongoing, but were repelled by operatives of Eastern Security Network, ESN. A statement by IPOB’s Media and Publicity Secretary, Emma Powerful, said that no matter how hard the enemies try, they will not allow any attack on Biafra land again.

8. Operatives of the Ondo State security outfit codenamed Amotekun have arrested a 19-year-old serial rapist and notorious kidnapper, Ibrahim Sanni. The state Commander of Amotekun, Chief Adetunji Adeleye said that the suspect has participated in different abductions of victims for ransom.

9. No fewer than 6,000 members of the Peoples Democratic Party (PDP) in Lokoja Local Government Area of Kogi State on Sunday defected to the ruling All Progressives Congress (APC). The former members of PDP were led into their new party by Hon. Umar Aliyu, who, until his defection, was a chieftain of the PDP in Lokoja 2 Constituency.

10. The Association of Nigerian Chartered Architects (ANCA) on Sunday called for the establishment of three committees to probe the Ikoyi building collapse. The President, Moyosore Omatsone, and National Secretary, Adekoyejo Jolaoso, issued a joint statement on Sunday. NAIJATABLOID