A 36-year-old Victor Etim Obot of Ikot Obio Mkpong in Ikono Local Government Area of Akwa Ibom State has been sentenced to death by the State High Court sitting in Uyo, the state capital, for killing his father.

It was proven beyond every reasonable doubt by the prosecution that Victor killed his father whom he accused of being responsible for his misfortunes.

The condemned will die by hanging.

Delivering judgment today in Uyo, the trial judge, Justice Okon Okon said there was credible evidence that the deceased died after the accused attacked him with a machete which was recovered at the scene of the crime at number 7C, Abak Road, Uyo on 6th of July, 2019.

“There is credible and acceptable evidence that the deceased died shortly after the accused attacked him with a matchet. I have no doubt that the accused did not only intend to cause the deceased grievous bodily harm but resolved to eliminate him for the nebulous, unsubstantiated allegation that his father was the cause of his problems,” he said.

The court also held that any man who stabs or inflicts a machete cut on another on the neck region has the intention to either kill or cause grievous bodily harm to the person.

It added that the prosecution led credible, cogent, and acceptable evidence to prove the essential ingredients of the offense of murder against the accused.

While holding that the killing of the deceased in the circumstances was unlawful, inexcusable and unjustifiable, the court added that the deceased did not deserve to die by the very hand of his own son.

“The accused acted callously in the gruesome murder of his father. The accused betrayed his father. Even the Heavens weep over the senseless killing of the old man, whose death the son rejoiced over, and construed it as the beginning of his freedom from his problems.

“I hereby find you, Victor Etimeyo Obot guilty of murder as charged and accordingly convict you. You are to be hanged by the neck until you be dead,” Justice Okon pronounced.(Dailypost) 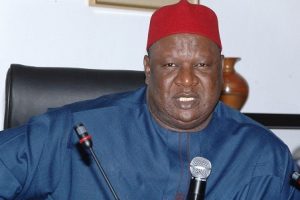