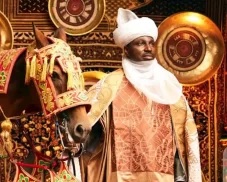 Foundation targets 50,000 youth for employment in 4 years – KEDCO MDEmploymentBy Muhammad LawalArgungu (Kebbi), Nov. 7, 2021 (NAN) Alhaji Garba Haruna, Managing Director and Chief Executive Officer, Kaduna Electricity Distribution Company (KEDCO) has unveiled a plan to create job opportunities for 50,000 youth.He said his newly established “Garkuwa Foundation” was targeting between 20,000 to 50,000 youth for employment in the next four years.Haruna stated this in an interview with Journalists in Argungu, Argungu Local Government Area of Kebbi State, on Saturday, after his installation as the Garkuwan Kabi by the Emir of Argungu, Alhaji Sama’ila Muhammad-Mera on Friday.

The emir had at the same ceremony also turbaned the Senate President, Ahmad Lawal and Senate Chief Whip, Sen. Orji Uzo Kalu as Ganuwan Kabi and Kibiyan Kabi, respectively.The KEDCO CEO, who spoke through the Head of Media and Communication, KEDCO, Alhaji Idris Muhammad, said: “We are looking at providing employment opportunities to between 20,000 to 50,000 youth in the next four years.“

We have actually gone far, but our target is to achieve the mission through direct and indirect employment.“One good thing we are doing is empowering the youth through imparting some useful skills to them so that they can stand on their feet and even become employers of labour”, he said.

Haruna added that the essence of establishing the foundation was to provide humanitarian assistance and create development initiatives, assuring that the foundation had already been constituted.He assured that the foundation would be formally launched shortly, adding that he had been providing direct and indirect job opportunities to teeming youth in the Argungu emirate and across the country.

According to Haruna, the opportunities included direct jobs in companies that he is a co-owner and indirectly for those who are employed by third party vendors providing certain services to the company.He advised the youth to eschew any form of drug abuse, shun all acts of violent crimes and imbibe the culture of independence and spirit of being productive in the society. (NAN)