Manchester United has been told that it would take them 10 to 15 years to win titles.

Solskjaer was shown the Old Trafford exit door on Sunday morning, barely 24 hours after the Red Devils were demolished by lowly rated Watford.

The last time Manchester United won the EPL title was under Sir Alex Ferguson in 2013 and since then, it has been either Chelsea, Manchester City and Liverpool winning silverware.

Redknapp, a former Liverpool star, warned that the Old Trafford landlords could now have to go another 10 or 15 years before winning the title.

“When you look at what Liverpool have got – Klopp. Manchester City – [Pep] Guardiola. Chelsea – [Thomas] Tuchel,” Redknapp told Sky Sports.

“And you have got a manager who has managed at Molde and Cardiff at one of the biggest clubs in the world.

“It isn’t right – you’re almost fighting with one hand behind your back in the big occasions and I never really felt he is the right fit.

“I said at the time it’s going to be like shooting Bambi and that is what it feels like because this should’ve happened ages ago.

“I understand what Gary [Neville] said about [Antonio] Conte but like you [Micah Richards] said, Conte has won the title five out of his last seven seasons.

“Before they got Sir Alex Ferguson they hadn’t won the title in 30 years. Liverpool had to find a manager for 30 years – 30 years it took them to win the league.

“They couldn’t get anyone – they found the best in Jurgen Klopp.

Manchester United caretaker boss, Michael Carrick, has said there has been no “drama” at the club over his decision to drop Cristiano Ronaldo from his starting...

Ballon d’Or organizers have said they are thinking about awarding Bayern Munich’s Robert Lewandowski the 2020 Ballon d’ Or award following comments from Paris...

Barcelona centre-back, Gerard Pique, has insisted that he would rather die than join Real Madrid in the near future. Pique, who said it is impossible for him...

Arsenal boss, Mikel Arteta has praised Gabriel Magalhaes after the defender courageously fought off thieves who were armed with baseball bats at his home. The... 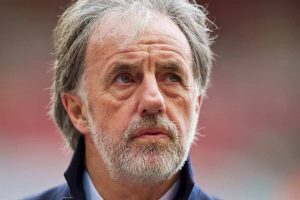