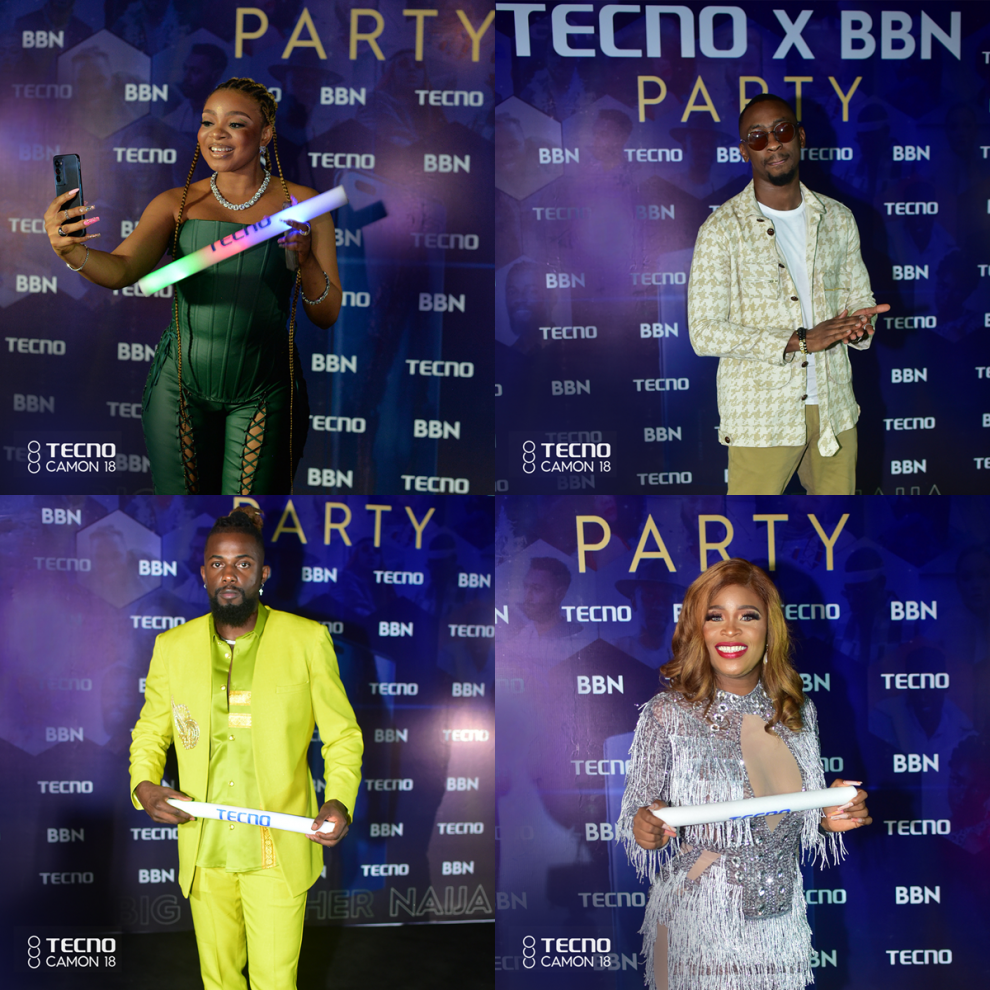 The BBNaija housemates were hosted to a turnt party by premium smartphone brand, TECNO, on Thursday, October 28th 2021.

23 out of the 26 “Shine Ya Eyes” housemates were present to grace the party and the atmosphere was nothing short of electric as they all arrived the venue in singles and groups.

The housemates didn’t disappoint as they came in looking dapper. We all know there can be no TECNO event without pictures, right?

Before the party, the housemates took several photos with the recently launched CAMON18 smartphone on the blue carpet.

Asides the BBN housemates, there were also in attendance celebrity guests, with Uti Nwachukwu and Kie Kie revving up the guests and making the night memorable with laughter and dance as they engaged the housemates.

Other notable faces at the party were Ric Hassani, Kunle Remi and a host of other celebrities and influencers.

The night started off with dinner as the housemates reminisced over the unforgettable moments from their time in the house. Even more fun were the secrets and inside jokes revealed to the delight of other guests and fans, thanks to celebrity hosts, Kiekie and Uti. They also shared some of the experiences they have enjoyed after their exit from the BBNaija house.

And then the party went into full-blown mode! Special recognition to the magical hypeman Toby Shang and the DJ Embassy who flowed so seamlessly, bringing some hyped energy and extra spice to the party!

In case you missed it, you can catch up on all on the fun and excitement on TECNO’s page.

The brand went all out to celebrate the housemates and give the fans a night to remember. (Dailypost)

‘We are good’ – Rema reconciles with Dj Neptune

Popular singer, Rema and DJ Neptune have reconciled after the former called him out for releasing his old song without his permission. NAIJATABLOID recalls...

‘Nobody is more important than anyone ‘ – DJ Spinall slams Rema

Popular Disc Jockey, Dj Spinall has slammed Rema for calling out his colleague, DJ Neptune about the release of his old songs. DAILY POST recalls that Rema had...

Veteran Nollywood actor, Mr Ibu has clarified reports on the viral video of him endorsing the National Leader of the All Progressives Congress (APC), Ahmed...

‘We are good’ – Rema reconciles with Dj Neptune

‘Nobody is more important than anyone ‘ – DJ Spinall slams Rema