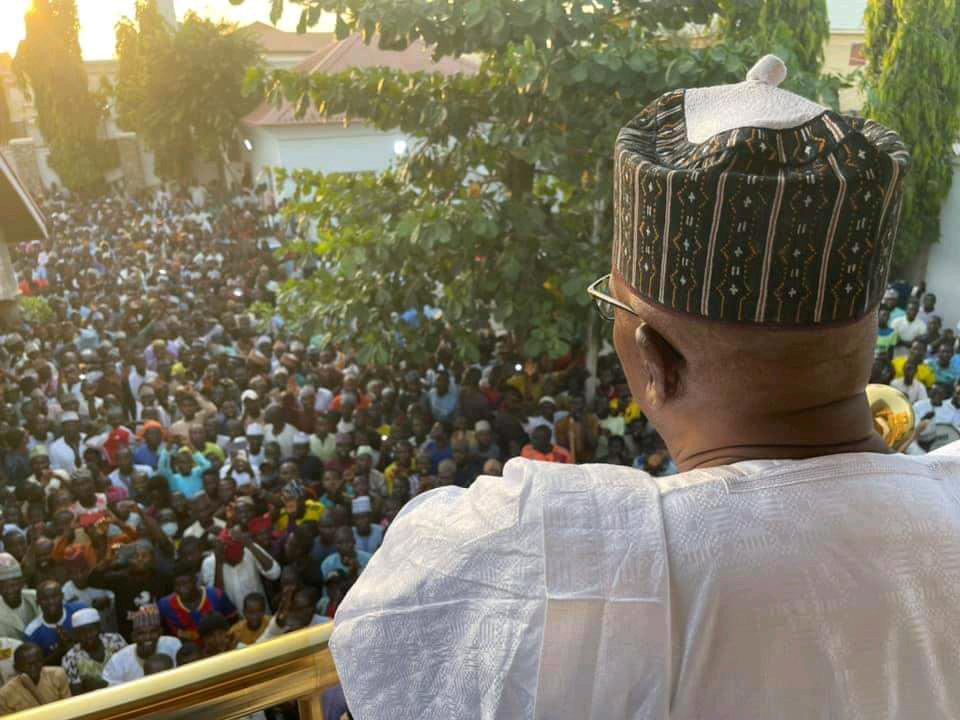 The Senator representing Gombe Central Senatorial District, Danjuma Goje, has appealed to all citizens in Gombe State to be peace-loving, saying they are all brothers who should live in harmony with one another.

He addressed a mammoth crowd that thronged his residence on Friday evening in the aftermath of the crisis that started at noon where his convoy was allegedly blocked by political thugs and miscreants while on his way from the airport to the wedding venue of his granddaughter.

In a video obtained by NAIJATABLOID on Friday, the former governor was seen appealing to the crowd who were on solidarity visit to him to be calm and law abiding.

Goje, who is the Senate Committee Chairman on Marine Transport, told the people that, “As a man of peace, I will not use my hand to destroy what I have built over the years in Gombe State”, recalling how he was attacked at Deba LGA, sometime ago by suspected thugs loyal to governor Inuwa Yahaya.

“You all witnessed what happened on my way from the airport to Gombe town when I was attacked by some aides of the governor including his ADC and Chief Security Officer,” he said.

NAIJATABLOID on Friday reported that there was crisis in Gombe State where suspected thugs loyal to the State governor blocked the ex-governor in a political protest.

But reacting in a statement by Gombe State Commissioner for Information and Culture, Julius Ishaya Lepes, the state government accused the ex-governor of hiring thugs from the entire Local Government Area of the State to unleash mayhem on innocent citizens.

The statement also vowed to punish those responsible for Friday’s violence in the State where one person was feared dead.

MTN Nigeria on Tuesday announced a public offer of 575 million shares at N169 per share with effect from Dec.1. The offer closes on Dec. 14. Its Chief...

Being Young in Naija (BYIN), a youth advocacy initiative, has urged youths to take active part in politics and other activities to contribute to national...